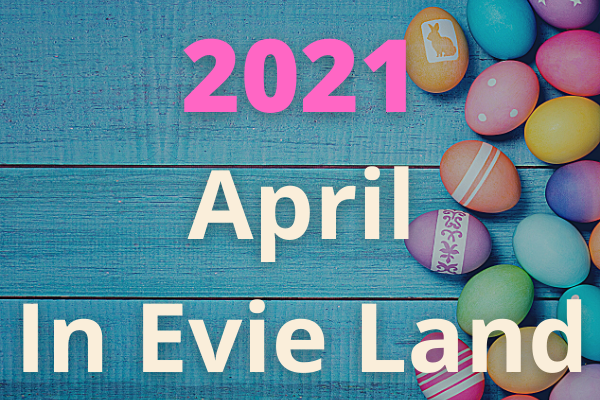 April started, in traditional fashion, with me falling for an April Fool’s joke, this one courtesy of Reedsy. This was the email I received:

“Big news 🎉 After three grueling years of development and testing, our team is truly excited to reveal our most ambitious project yet! Announcing: Reedsy’s Novel Generator.

Having analyzed over 10,000 bestsellers from the past fifty years, Reedsy’s proprietary AI system can now instantly generate novels to rival some of today’s most celebrated works.

With over 50 billion possible combinations of characters, time periods, and plot events, each novel created with this system is guaranteed to be unique. Any book you create with Reedsy’s novel generator can instantly be copyrighted under your name — so try it out and get ready to have a hit on your hands.

I was so tired when I opened the email, and so trusting of the great content that Reedsy put out, that I clicked the link and tried to generate a novel. Yes, that’s right. I genuinely thought I could click a button, and some crazyass software would generate my next book for me. What. A. Total. Nobber.

So now, you can smirk smugly into your current beverage du jour, safe in the knowledge that you’re floating at least twenty gazillion IQ points above me. It’s during times like these that I end up blustering at my husband, ‘I’ve got two degrees!!!’ in the vain hope this statement somehow compensates for the fact I’ve just tried to combine fruit with a metal spoon in a blender, or have described sunlight coming through trees as ‘Ooh! Look at the thing coming through the thing!’

So, let’s face it, April could only get better. At the start of the month my first three books went to my editor, and I turned my attention to redoing their blurbs, hooks and taglines. Blurbs are such a nightmare to write. You have just a few short words to entice the reader in without giving away the whole plot. It’s an art form in its own right and, along with the cover, is the most important selling tool for a book. I’ve updated the blurbs on my books page now, but know that they will continue to evolve as I move towards publication.

Easter then announced its arrival with hail, snow, a plague of locusts and my mother-in-law. We haven’t seen my husband’s parents for nearly a year, however they finally felt comfortable enough to sit in our back garden for an anti-socially distanced cup of tea, a catch up and to exchange long overdue Christmas and birthday presents. It was so lovely to see them, although the lack of physical contact I find heartbreakingly painful. Hugs and touch are such an intrinsic part of our humanity and the lack of this for over a year now (despite, thankfully, having my husband and daughter) is taking a big toll on my mental health.

Over Easter I allowed myself a couple (ish) of days off, and binge-read like a bastard. My standout reads were ‘What we Deserve’, by British author Lizzie Stanley, ‘The Year of the Fox’ and ‘Bluffing for Beginners’ by Kiwi author Merren Tait, the poetry book ‘Poetry From An Empty Mind’ by British author and horse whisperer Dilara Pataudi, and ‘The Roommate’ by Rosie Danan. It was great to ‘meet’ these amazing ladies online and to chat about the writing process. Getting to know other authors over the last couple of years has been fabulous, and I love making these connections.

Another connection I made this month was with Erica, a bookstagrammer, famous for her virgin trope rants. Check these out!

As well as being absolutely hilarious, they also caused me to further question my default belief systems around gender relations and romance novels, which were built upon a foundation of Mills & Boon books from the seventies and eighties. These books all featured virginal heroines, and animalised men who took what they wanted as they couldn’t ‘control their desires’. Even though I describe myself as a feminist, it’s very easy to get lost within these tropes and just end up repeating them. After reading the writer Sarah Lin Wilson Turner’s Top Ten Romance Tropes That Need to Die Already, I changed a pivotal scene I had planned for book four, and after chatting with Erica, I decided to make the male lead of book four (SPOILER ALERT!) a virgin. This actually fits much much better with his backstory and life, and I want to handle it in a way that doesn’t simply replicate the ‘female virgin’ trope books that make me want to barf.

This month I’ve also started publishing the backlog of blogs that have been building up in my back end (arf arf), so if you haven’t yet had a read, go check out a book review blog, What Evie is Reading, a blog about the Best Facebook Groups for a Romance Author, a blog detailing exactly What is a Beta Reader, and a blog on How to Write the First Draft of a Book, which is based on my experiences of writing book three.

April’s update cannot go by without another edition of ‘What the Puppies Did Next’ or, as I’ve decided to name this section, ‘PUpdate’. See what I did there?! I astound even myself… This month started with me making a double-sided cashmere blanket for the puppies, using a sewing machine that is nearly one hundred years old. Yes, I took a load of offcuts from my side project of making baby blankets that never get finished, to make a DOUBLE-SIDED CASHMERE blanket for two crazy furballs who (A) don’t give a fuck, and (B) have already destroyed shoes, slippers, a mat, a chair, and the entire garden. Thank GOD my husband convinced me it could not be given to them, so it went to my daughter instead.

Other puppy highlights include a visit to the dog groomer, and Chester deciding that my husband is so alluring when he’s doing his nightly exercises, that he needs to climb on his back, then start humping his arm.

You have to watch this video with the sound on, so you can hear me lose the plot laughing.

And with the world slowly opening up again, it was a chance to go to the hairdressers for the first time in nearly a year, and discover that the best place in my entire house for taking a selfie is the downstairs bathroom at six pm. Seriously, I NEVER look this good in real life. I’m going to rent it out as a micro studio for middle-aged women who need a confidence boost.

But I’m going to end this month’s update blog with some Evie book chat. I was having a bit of a wobble about starting book four, so had a pep talk from my editor. We thrashed through different options, including putting it completely on hold and starting the Beckett series early, before coming to the conclusion that I’m already so far down the line with Sam and Jamie’s story that I might as well start it, and trust that it will evolve successfully as book three did.

Buoyed by this decision, I began an epic series of phone calls with the amazing Margaret Amatt. The two of us have moved from pantsers to planners at the same time, and have a good understanding of the structural elements that make a good story. She’s currently helping me get my thoughts and ideas in order, and I’m in the middle of creating a detailed outline before I write a single word.

Margaret has followed this approach for her last two novels and as a result, she wrote each one in only six days. Yes, she wrote nearly seventy thousand words in six days… Holy shitballs. Now there is no way I have the intellectual capacity to do this, however, based on how quickly I wrote book three once I knew what I was doing, I genuinely think I could draft book four in five to six weeks. Time will tell!

Then my eyes padoinged out of their sockets, the top of my head blew off, and every cell in my body exploded like a party popper when I discovered I had been mentioned in the back of Kelly Kay’s duet, ‘Over a Barrel’ and ‘Under the Bus’. This is my absolute author dream, to be namechecked in the back of someone else’s book, especially an author I rate so highly. And she knows me so well. When we do get to share a bottle of wine in person, I will indeed be shitfaced after a quarter of a glass, whilst she will still be going strong four bottles in…

So, there we have it, my little love monkeys. If you’ve enjoyed reading my April update, and want to follow more of my daily attempts to master putting one foot in front of the other whilst perpetually face-planting, then come say hello on Instagram and Facebook. And if you want to have a sneak peek at the prologue and chapter one of Highland Games, as well as two exclusive excerpts, then sign up for my newsletter! 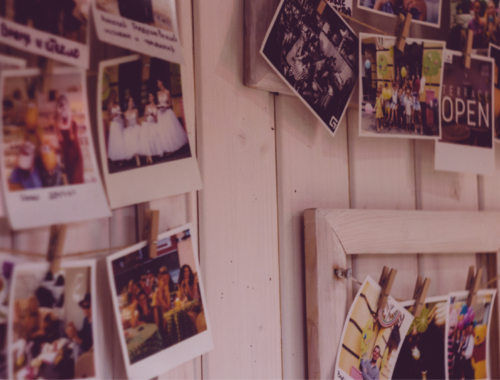 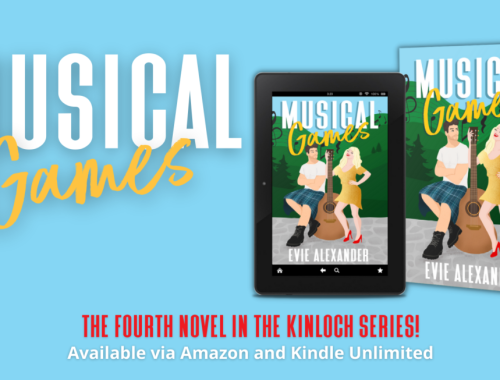